WSJ on the “Band of Brothers” at Calvert Cliffs | AREVA North America: Next Energy Blog 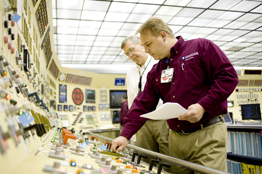 There is a must read article at the WSJ that describes the “band of brothers” alliance that nuclear energy workers have with their counterparts in Fukushima. The article focuses in on some of the Calvert Cliffs Nuclear Power Plant workers in Maryland:

There are 60,000 employees at 104 nuclear plants in the U.S., according to the Nuclear Energy Institute, an industry trade group. Many of them, like the workers here at this Constellation Energy Nuclear Group LLC facility on the shore of the Chesapeake Bay southeast of Washington, are likely watching events in Japan while asking and fielding questions of their own….

Workers throughout the plant say it has helped that they have had town-hall meetings led by plant vice president George Gellrich, who passed along information from the Nuclear Regulatory Commission, NEI and the Institute of Nuclear Power Operations about Fukushima. In addition to gaining a better understanding of the differences between the plants, they wanted to know how they could help Japanese workers.

The piece really echoed the heart of the industry, “Nuclear energy is special and unique,” says Kent Mills, 51, from his perch overlooking the control room where crews monitor the reactors. “You should not be afraid of the technology but you should respect it to the utmost degree.”

And we found the piece particularly moving and have seen this spirit among our industry colleagues here in the U.S.:

Mr. Gellrich received a text message from his 20-year-old daughter at college after news about the volunteers at the Japanese plant surfaced. “Would you be one of the 50?” After he responded yes she texted: “I am proud of you.”
Tim Riti, 45, a licensed operator and now general system supervisor said his three children ages 10, 12 and 19 have asked if the plant could have a similar crisis. “They know I’m part of the emergency response team,” he said. “Not only am I one of the 50 but I’d be one of the 50 fighting to be one of the 50. This is where I’d want to be.”