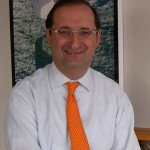 “Despite broad support for effective climate legislation, its passage is not certain. Yes, many stakeholders want action. But too many of them are promoting parochial interests at the expense of the greater good.

Some special interest groups focus entirely on energy efficiency. Others are wedded to renewable sources and say no others need apply. Still others are battling for a greater role for biofuels, small hydro, clean coal, nuclear energy or any of a host of others. Which one should the government choose?

My response is that it is not an either/or question. We need a broad range of clean energy alternatives and we need to get moving. While some projects already are under way, a strong climate bill would hasten the development of more clean energy projects and create thousands of additional green jobs.

Rather than advocating and defending so many individual energy “silos,” none of which will solve the problem alone, we should unite behind a holistic approach. We should rally around the broad banner of clean energy, defined as all sources that produce little or no carbon dioxide and have a minimal impact on the environment.
Two areas are particularly promising and deserve priority attention in developing a holistic solution.

The first is renewable energy, especially offshore wind, biomass and solar. Today, renewables account for 3 percent of our energy supply, but there is great potential for growth.

Wind off our coasts is perpetual, continuous and clean. No one can disrupt its supply. Similarly, the sun offers the potential for an inexhaustible source of energy.
The second is nuclear energy, which supplies 20 percent of the nation’s total electricity, but is by far the largest source of CO2-free electricity.

America’s nuclear power sector accounts for nearly 75 percent of our clean air energy, thus any expansion of our nuclear sector would avoid massive volumes of emissions.

But a sizeable number of Americans still harbor fears of nuclear power. Our challenge is to do a better job of informing the publicabout the nuclear industry’s exemplary safety record over the last 50 years.

There are those who suggest that, as we develop a cleaner, more efficient power sector, we must choose between nuclear energy and renewables. This is a false choice, and forcing people to make one would be a huge mistake.

Read the full piece from the Tri-City Herald (Wash.) here.

A version of the op-ed also appeared in Sunday’s Lynchburg (Va.) News & Advance.