When the Difference between Success and Failure is Paper Thin

When the difference between success and failure is less than the thickness of a sheet of paper, you know all eyes are watching. Such was the case for AREVA’s Component Repair & Replacement (CR&R) metrology team who was tasked with measuring, fabricating and installing replacement in-service components with extremely tight parameters at a U.S. nuclear energy facility.

The team’s challenge was to recreate in the shop environment the as-found plant configuration of an in-service diesel generator’s intercooler spools and then to fabricate, deliver and install new spools on the existing machinery. 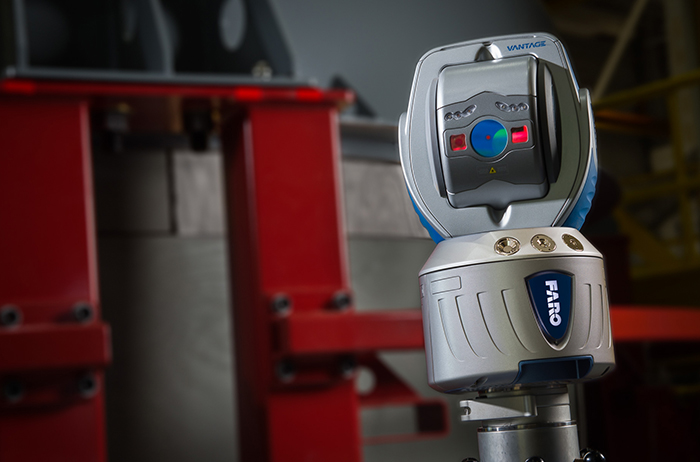 Marrying the old with the new required a great degree of accuracy. First, the team measured the original assembly using photogrammetry that yields accuracies +/- .005” – less than the thickness of a piece of paper. Photogrammetry is a triangulation measurement process that uses a series of overlapping high-resolution digital images and a robust software package to derive accurate, three-dimensional coordinate measurements.

Next, the assembly was recreated using laser-tracking technology, with accuracies of +/- .001”, to set up templates at AREVA’s fabrication shop in Lynchburg, Virginia. The laser tracker is a real-time measurement tool that uses an interferometer, two precision encoders, and sophisticated proprietary software to calculate the three-dimensional position of a mirrored target (probe). The system follows the mirrored target over features, updating the position at a rate of one thousand times per second.

In the shop, the team completed the soft templating process to accurately recreate the as-found plant configuration of the assemblies. The team then used the precise digital template to fabricate replacement intercooler spools for the diesel generator.

The new intercooler spools were a perfect match. The AREVA team’s ability to fabricate the intercooler spools for a successful first-time fit with no safety, quality, performance or delivery concerns reduced their customer’s outage time by approximately 120 hours—a significant direct cost-savings for the facility.

When perfection counts, AREVA’s metrology team measures up to the challenge!