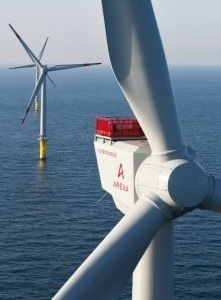 It’s more than just jobs – though thousands of manufacturing jobs per installed gigawatt is a powerful incentive. And it’s more than powering hundreds of thousands of American homes with a carbon-free renewable resource.

In the same way ripples expand across a still pond well after tossing in a rock, developing and supporting gigawatts of offshore wind power with a regional manufacturing hub generates an expanding ripple of educated workforces, advancing technology, and investments in future-facing industries.

In an interesting twist completely appropriate for the novel workings of the developing U.S. offshore wind industry, the ripples are spreading before even a single offshore turbine foundation hits the water.

Education
The University of Delaware’s Center for Carbon-free Power Integration Offshore Wind section has been sparking students’ creativity and research since 2005.

Likewise, the University of Maine will start offering a Master of Science in Renewable Energy and the Environment in 2011, and an undergraduate minor in Deepwater Wind Energy. It already has people and Op-Eds talking:

Now, Maine stands positioned to become a national leader in offshore wind, in part because of the state’s support of the research and development at the University of Maine under the leadership of Professor Habib Dagher, a rare visionary among Maine business leaders.

Institutions like these are not waiting for the policymakers to catch up, they’re pushing ahead and educating a ready and capable workforce of skilled researchers, designers, and leaders to explore and define the shape of the new U.S. offshore wind industry.

Advancing Technology
From the business perspective, the visionaries are already looking beyond placing steel in U.S. waters and planning to tap the potential of this unique manufacturing and design capability. Though, the U.S. currently lags far behind European markets, part of the American fabric of business is to recognize and seize opportunities, and then lead development expansion. I’m sure enterprising U.S. companies are starting to understand the market potential experienced by European firms supporting the hundreds-of-million-dollar offshore wind farms going up in the North Sea.

But business is more than just objects, it’s also concepts and contracts. I expect that once the U.S. industry gets a few projects under our collective belt, we’ll continue pushing into the next generation of offshore wind technology. As the U.S. continues advancing the technological edge, the world will again look to American market champions for innovative global leadership.

Step to the Future
Even less clear, but perhaps more important is the idea that investing in offshore wind power is investing in tomorrow’s clean energy technology, and not yesterday’s industrial revolution. As that same editorial in the Seacoastonline.com states about the potential in Maine,

Nearly 1,000 megawatts of wind power is already installed or being permitted on land, and the offshore potential is much greater.

We don’t need to embrace pie-in-the-sky to see that this could not only provide moderate-cost electricity for Maine, but could spawn a major new manufacturing industry employing 5,000 people or more — the first on that scale since the heyday of the paper mills.

Offshore wind power shifts the perspective from a carbon-choking environmental shrug to a positive legacy in the eyes of our young New Energy Generation.

Sure it’s jobs and electricity, but the U.S. offshore wind industry will also power education, innovation, investing and environmental advancements.

Who knew that a gigawatt could be so powerful?