“What are the radiation levels at a nuclear fuel storage site?” (plus 9 more FAQs)

We can help with those answers.

Based on that experience, let’s take a look at the…

1. What are the radiation levels at a nuclear fuel storage site?

Immediately next to the closest publicly-accessible area boundary, the total dose received from a dry nuclear fuel storage facility containing sealed NUHOMS® containers is virtually undetectable, and is well below the regulatory limit of 25 mrem over the course of one year. By way of comparison, the average American receives a dose of about 310 mrem in one year from natural background sources of radiation, such as cosmic rays and radon.

In fact, if horizontal storage modules (HSMs) are added to a site in front of existing vertical systems, the minimal dose to the public can be further reduced, in essence, blocked by the HSM modules. 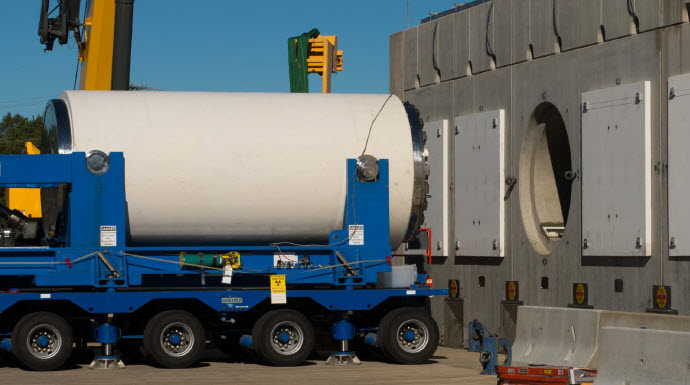 2. What happens when a tornado or even an airplane strikes the used fuel storage site?

4. How long does used fuel have to stay in the reactor’s used fuel pool before it is put in a dry cask storage system?

Cooling time in the reactor’s used fuel pool before dry storage is typically at least 5 years after the fuel’s last operation in the reactor core. Available AREVA TN canister designs allow for storage after as short a time as 3 years.

5. How do you keep the used fuel safe in an earthquake?

The AREVA’s NUHOMS® system securely stores the dry fuel storage containers in a horizontal position within sturdy, low-profile, side-by-side reinforced concrete structures. Our robust earthquake-resistant design achieves the highest seismic capability of any used fuel storage system in operation today. To state the obvious, systems already in a horizontal position cannot tip over. We offer NUHOMS® module designs that are engineered for up to 1.5g horizontal ground acceleration and 1.0g vertical acceleration. As a reference point, people have trouble standing at 0.02g acceleration!

To facilitate removal of nuclear fuel from plants sites, AREVA is partnered with Waste Control Specialists (WCS) for the development of a License Application for an Interim Storage Facility (ISF) for Used Nuclear Fuel at their facility in Andrews, TX. The goal is to begin receiving fuel from shutdown reactors in the 2020 – 2022 timeframe.

7. How would a utility transport containers loaded with used or high burn-up fuel from the utility site?

AREVA’s NUHOMS® MP197HB Transport Package is NRC-licensed for the transportation of used nuclear fuel, including canisterized high burn-up fuel, from the utility site to a repository, to another interim storage site, or to a recycling plant, whichever options are available to receive used nuclear fuel. The NUHOMS® MP197HB transport package is approved for use by rail, truck or marine transport and is currently being fabricated.

8. Can “damaged” nuclear fuel be safely stored and then transported?

Damaged fuel can unequivocally be safely stored and transported in AREVA’s dry shielded canisters, just as undamaged or intact fuel can be safely stored and transported. AREVA’s dry shielded canister includes an internal basket structure that keeps the fuel assemblies separated and stable. When storing damaged fuel, we either take an added step of inserting screened caps on either end of the basket compartment, or we place the fuel assembly in a separate ventilated container (called a “can”) before placing it in the basket. The damaged fuel can then be safely stored in exactly the same manner as intact fuel in our NUHOMS® system.

“Burn-up” is a term used to describe how much energy has been produced in a nuclear fuel assembly. Burn-up can be thought of as the “gas mileage” for nuclear fuel because it tells us how much energy has been extracted from a given amount of uranium in the same way that “miles per gallon” tells us how far a car will go on one gallon of gas. Typical units are “Gigawatt-days per Metric Ton of Uranium” (GWD/MTU). The U.S. Nuclear Regulatory Commission (NRC) considers “High Burn-up” Fuel to be any fuel with a burn-up higher than 45 GWD/MTU. There is nothing magical about the 45 GWD/MTU number – it is a somewhat arbitrary limit to mark the boundary between “high burn-up” and “low burn-up” fuel. The term “Gigawatt-days” is the amount of energy required to produce one gigawatt (1 billion watts) of power for one day (24 hours). It is similar to the more familiar term “kilowatt-hour” or “kW-hr” seen on a monthly electric bill (i.e., one kilowatt-hour is the amount of energy required to produce one kilowatt [1000 watts] of power for one hour). By way of comparison, since 1 Gigawatt is equal to 1,000,000 kilowatts, 1 Gigawatt-day is equal to 24,000,000 kilowatt-hours. Since nuclear fuel produces enormous amounts of energy, we need to use big units of measure!

The NRC issues a license for dry fuel storage systems for an initial period of 20 years. When the initial license ends, it does not mean that the system is no longer safe, it simply means it requires review and renewal – much like a driver’s license. At the end of 20 years, the NRC requires that a license renewal application be submitted, which, if approved, will extend the license for an additional increment of up to 40 years. The NRC does not place a limit on the number of 40-year renewals that can be obtained.

The design life of AREVA’s NUHOMS® systems is 100+ years with an aging management program. Effective product life can be extended almost indefinitely through inspections, aging management programs, and maintenance. The NUHOMS® system’s horizontal above-ground fortress-like structure enables easy slide-out access for inspections, monitoring, and maintenance that may be needed for aging management and life extension programs. AREVA TN’s NUHOMS® is the only dry storage system that has an Aging Management Program approved by the NRC that addresses chloride-induced stress corrosion crack and canisters with high burn-up used fuel.

Other systems, including underground systems, are more difficult to access and inspect, and require more risky maneuvers to extract a compromised canister.