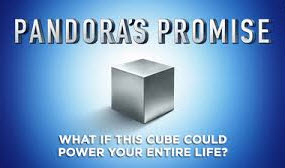 What would happen if everything you knew about nuclear energy was wrong? This is the question raised by environmentalists interviewed in the blockbuster documentary hit Pandora’s Promise, which airs tonight on CNN at 9 p.m. eastern time (8 p.m. central time).

The groundbreaking film by Academy Award-nominated director Robert Stone follows the path of several leading environmentalists as their research convinces them to shift from opposing to supporting nuclear energy. In the film, environmentalists Stuart Brand, Gwyneth Cravens, Mark Lynas, Michael Shellenberger, and other experts discuss the important role that nuclear energy plays in combating climate change.

Stone has been making the talk show rounds in advance of tonight’s broadcast premiere, debating Robert Kennedy Jr. on the Piers Morgan show and also Van Jones from the program “Crossfire.” There is even a good conversation with Stone in the Huffington Post. There are also good discussions under way at NEI’s Nuclear Notes and CNA’s TalkNuclear.

As the world leader in nuclear energy, it’s no surprise that AREVA’s technologies and facilities figure prominently in the film. In the summer of 2011, Stone and cinematographer Howard Shack filmed the Chalon-St. Marcel equipment fabrication facility, La Hague fuel recycling plant, the Flamanville EPR™ reactor construction site, and other locations in France.

Even if you are skeptical about nuclear energy, you owe it to yourself to consider this film’s point of view. According to the Sundance Film Festival where the film debuted in January: “Whatever your stance, Stone’s compelling film opens Pandora’s Box and promises to change the conversation for years to come.”