Our visit began with a tour of the used nuclear fuel recycling AVEVA facilities in La Hague in the Normandy Region of France, followed by a tour EDF Flamanville 3 site to see the construction of the third and newest EPR™ reactor slated for completion in a couple of years. The dominant themes in my mind were recollection, marvel, harmony, and consternation. 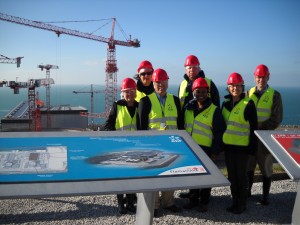 AREVA’s Community Advisory Council during their tour of Flamanville 3

Recollection – This visit to La Hague was not my first. I had first visited this site 15 years as a guest of Cogema (AREVA’s predecessor). Hearing and witnessing again the details of the fuel recycling cycle invoked memories of my initial visit and I was as impressed now as I was then. While the basic technology has not changed significantly, the many years of successful operating experience has undoubtedly contributed to the science and to the economics of used fuel recycling.

Marvel – No one can visit either the Flamanville or La Hague site and not be amazed at the enormity of these capital intensive projects. So much concrete is being poured at Flamanville that it moves through pressurized pipelines.

Harmony – Both of these projects are situated at or near some of the most beautiful, natural coastal scenery in the world. The French Normandy Region has natural beauty as well as historic significance. Make no bones about it, these are industrialized, heavy industry sites. No one tries to paint them green or drape them in foliage to mask their physical appearance. Yet they do manage to coexist in harmony with the natural topography. In Flamanville‘s case, it is situated on the coastline atop a former site of a subsea iron mine, and can be seen from land only when physically at or near to the site.

Consternation – At La Hague, I had the same sense of consternation I experienced 15 years ago upon viewing the success of used fuel recycling: Why did the United States choose to abandon this technology pathway in the 1970’s as a way of managing its used fuel obligation, and how much have we paid in monetary and political capital by virtue of gridlock during the last two decades in managing our country’s used nuclear fuel? While I was excited to see the enormous technological advances offered by AREVA’s technology, I was left with a feeling of disappointment at the political incapability of the United States to choose a durable waste disposal strategy.

Postscript for the day: I took notice of the considerable security in the form of GGG (guns, gates, and guards) during the visit, something I didn’t do in my pre-9/11 visit years ago. Perhaps it’s because I was paying attention this time, but there seemed to be a lot more security infrastructure (concertina wire, etc.) than I recalled.

This was a highly informative visit to the AREVA’s fuel enrichment facility. I finally saw the differences between gaseous diffusion and centrifuge technologies for fuel enrichment. Although I knew that the latter was the more modern and less costly technology, this was my first opportunity to see it firsthand, and the infrastructure required, such as a concrete foundation capable of buffering seismic activity.