Three senior leaders of the global nonproliferation effort have strongly recommended the completion and operation of the MOX Fuel Fabrication Facility (MFFF), or MOX Project, to fulfill America’s agreement with Russia and trigger their compliance.

These leaders’ vocal support is based on sustaining two critical goals for the United States:

The Russians are fulfilling their commitment to the Plutonium Management and Disposition Agreement (PMDA) by advancing the BN-800 fast reactor to “burn” surplus plutonium in a mixed oxide fuel (MOX). But in the absence of the U.S. ability to process its surplus weapons-grade plutonium, the Russians are prepared to use only civilian nuclear fuel plutonium, not their stockpile of surplus weapons-grade plutonium. As Richardson noted in a letter to Senate Minority Leader Harry Reid (D-Nev.) and during his recent Press Club meeting,

In recent years, the U.S. Department of Energy (DOE) re-opened considerations for alternate methods to store the plutonium, but only the MOX method fulfills the PMDA requirement to make a permanent isotopic change in the surplus plutonium so it cannot be used again in a weapon. In an op-ed in Politico, Lugar emphasized the potential consequences of pivoting to an alternate method, and the inherent uncertainty such an action would add to the nonproliferation effort:

“Launching a new disposal method inevitably would bring a whole new set of environmental, legislative, regulatory, and political controversies that could take years to resolve. Moreover, this almost certainly would violate the plutonium disposition agreement with Moscow. The Russians have long opposed burying the plutonium because it doesn’t really destroy the material, as burning the MOX in a reactor does—it can be retrieved and reused for nuclear weapons purposes.”

One alternative highlighted by DOE involves expanding the mission and physical footprint of DOE’s Waste Isolation Pilot Plant (WIPP) to include disposal of down-blended surplus weapons-grade plutonium – though such a process would not deliver the permanent isotopic changes required by the PMDA. The recently released expanded High Bridge report further analyzed the practical impacts of the WIPP disposition option and identified important concerns with key criticality and design basis changes. High Bridge’s analysis concludes that the operational impact of DOE’s WIPP disposal alternative would introduce new potential accident scenarios and open the entire facility design to hostile legal intervention – threatening the facility’s ability to meet both current and future missions. 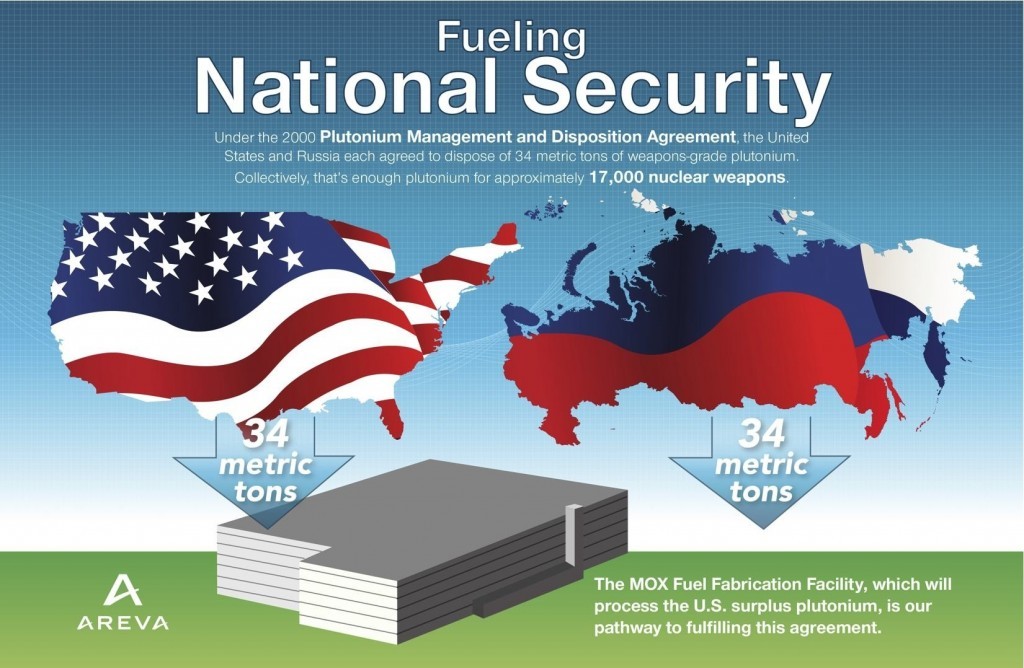 Abandoning the nearly 70% complete MOX Project facility in South Carolina will abandon the PMDA agreement and release Russia from its current plutonium disposal commitments. Any new agreement would require starting new negotiations with Russia at a sensitive time in international relations. Again, Lugar makes the point in his op-ed,

“Given current tensions with Russia, any renegotiation of the plutonium agreement could require us to make costly or damaging concessions … Stopping the MOX facility now would derail one of the most important accomplishments in modern U.S.-Russian relations.”

In a letter to Sen. Mitch McConnell (R-Ky.), Gorton highlights the security risk in delaying the elimination of these surplus plutonium stockpiles.

“Let’s not allow the DOE to cancel the important MOX Project construction – instead, we should find a way to move forward, finish the job, and work to eliminate these dangerous nuclear materials in both the U.S. and Russia, ensuring that they won’t fall into the wrong hands to be used against us or our allies.”

We agree with these leaders’ commitment to the established nonproliferation path and posted our own 5 Key Facts about the MOX Project to ensure clarity on some of the points in question.

As Richardson said in his closing statements, “Don’t kill something that’s working. We have to keep our nonproliferation commitments – that’s paramount. Stay the course on completing the MOX Project.”