He begins by describing his visit to a site on the Wyoming plains where 10 percent of our nation’s coal is being dug out from one of the world’s largest strip mines:

“Standing at the precipice, staring into the thick black mineral vein, I find it difficult to envisage how an enterprise of this magnitude could be stopped, and what could take its place.”

“… even as the consensus among experts builds that coal and other fossil fuels must be sharply reduced and eventually removed from the energy matrix, there is no agreement on what sources of energy could feasibly take their place, and how to get from here to there.”

This raises the question facing the U.S. and our energy policy vision with an eye on climate impact: Which replacement clean air energy source can generate substantial amounts of on-demand power with a stable domestic fuel price and efficient technology implementation? 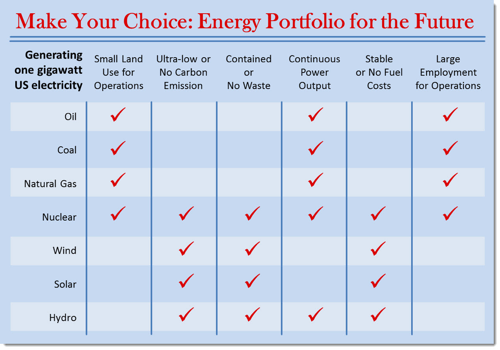 Porter explores the economic side of the technology question first using a recent analysis of power generation, stating:

“… even if the world were to impose a tax of $30 per metric ton of carbon dioxide, neither wind nor solar could outcompete gas and coal. A new generation of nuclear power, by contrast, is potentially the cheapest energy source of all.

The study projected that the typical nuclear generator in North America could produce power at $50 to $75 per megawatt/hour, depending on assumptions about construction costs and interest rates, against $70 to $80 for coal-fueled power. Wind-powered electricity would cost from $60 to $90, but there are limits to how much it can be scaled up. A megawatt/hour of solar power still costs in the hundreds. The study concluded that nuclear power would prove even more competitive in Asia and Europe.”

Next, he considers the stark questions and new answers passionate environmentalists are realizing as they re-examine long-held biases and the climate urgency of billowing emissions. As an example, Porter presents environmentalist Robert Stone and his film “Pandora’s Promise”, citing the filmmaker’s views that the environmental need for nuclear power is becoming ever clearer to a new generation of environmentalists.

But where is this additional nuclear energy? Though the daily renewal of existing U.S. nuclear energy facilities added about the power equivalence of six new nuclear reactors, Americans’ increasing energy demands require that our country accelerates the development and implementation of next-gen nuclear energy technology, and train a substantial new workforce to build and operate them.

Porter’s key point is the one he closes the article with: “If nuclear power is to play a leading role combating climate change, it should start now.” The nuclear energy technology already exists. It’s the political vision that’s still in development.

Additional insightful content makes this article very much worth reading and sharing.