AREVA delivered two 510-ton steam generators to Exelon’s Three Mile Island (TMI) Generating Station on Wednesday, Sept. 30 — on schedule and without any safety issues. The steam generators arrived in Port Deposit, Md., on Sept. 8 and 9, and on Sept. 13, they began the 75-mile, 22-day journey to TMI in Dauphin County, Pa. 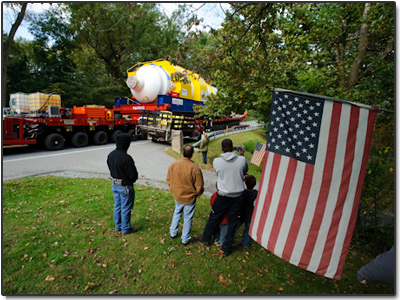 After two years of planning, negotiating, and preparing, project manager Sue Coleman walked the transport to TMI’s North Bridge. She and several AREVA team members walked more than 100 miles along the way and were greeted by thousands of spectators who were excited to see this piece of history. They also came out to see what they thought would be impossible — 90-degree turns and steep inclines. They were no problem for Fagioli’s Self-Propelled Modular Transporters. Each steam generator spanned two transporters powered by four 500-horse power diesel engines. As for the tight turns, all 52 axles on each unit turned independently providing amazing maneuverability.

The transport team included subcontractors Michael Baker, Jr., Inc. and Kensley Construction, Inc., both of Harrisburg, Penn., as well as local utilities and state police. Each played a key role in the successful delivery. In addition to the economic benefit of the transport, the installation during TMI’s fall outage will provide another 1,500 jobs… and continued electricity generation for Americans. 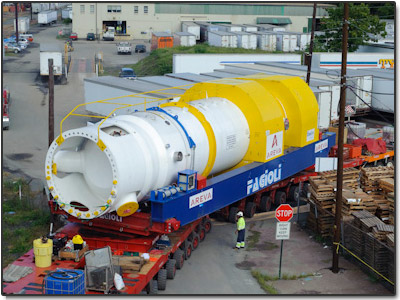