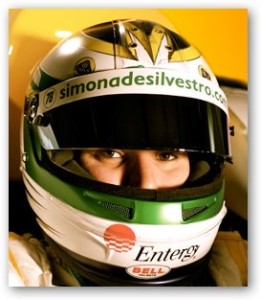 During any given race season, we meet a lot of different people. In addition to the fans in attendance, our sponsors bring guests to our races from various backgrounds. We enjoy getting to know and entertain them all. But, every now and then we meet someone who we know immediately will leave a lasting impression. Scott David is one of those people.

Mr. David was invited to the IZOD IndyCar season finale in Fontana as a guest of AREVA, one of HVM Racing’s Nuclear Clean Air Energy sponsors and one of the largest clean energy companies in the world. David met AREVA recruiter Amy St. John at a ‘Hiring Our Heroes’ job fair in Lynchburg, VA and was recently hired within the Reactors and Services group. What happened next surprised the retired Army vet.

“While we were waiting for the background checks to come back,” he said, “I got a phone call from AREVA saying, We don’t have your background check back, but how would you like to go to an IndyCar race with us? I’m like, What? It was a shock to my system; I didn’t expect anything like that.”

David, who officially started work with AREVA the day after returning from the Fontana race, served in the Army’s infantry for 23 years. He was also a paratrooper, serving in the first Gulf War (1990-1991), Bosnia (1996), two tours in Afghanistan (2006 and 2010-2011), and was stationed in Germany on three separate occasions. David understands the importance of team work and immediately picked up on how that aspect of racing mirrors his experience in the military.

“You can’t accomplish anything by yourself,” he said; “it takes a team to accomplish any mission. You have the same thing, everybody has their area that they’re the expert in or that they have the most knowledge in and that’s what they contribute, but it’s everybody working together to accomplish the mission, whatever that may be. Seeing the guys working in the pits and listening to them on the radio, everybody’s got something they add to it to make everything work.”

Driver Simona De Silvestro took time to show David the team’s pit box and explain how the team is able to see everything she does in the car through telemetry and other aspects of the technologies that go into IndyCar Racing.

“It was fun showing Scott around,” she said. “I showed him the monitors for the telemetry and how everything unfolds on a race weekend. I hope he had fun.”

Having lived in Europe, David admits to being a Formula One fan and has not followed IndyCar seriously up to this point. He found it interesting and enjoyable.

“I watched the Indy 500 a few times,” he said, “but that’s as far as it went. It’s been interesting. It’s been a learning experience with all the technology that goes into the cars and the telemetry that comes back off the cars and how they analyze it, process it to make the car better. It’s been fun. I know it’s an experience that most people don’t get to have; being in the garage, in the pits to watch practice, and seeing everything that goes on behind the scenes. It’s been very interesting and I’ve enjoyed it a lot.”

AREVA’s newest employee is also looking forward to starting his new job. David will be working out of their Lynchburg, VA facility, but traveling quite a bit this fall as a member of AREVA’s outage services team. In this capacity, he will support scheduled refueling outages at civil nuclear electric generation stations. These outages typically occur every 18 to 24 months for normal refueling and maintenance activities.

“Yesterday, somebody called me a hero,” David told me. “I’m not a hero. I’m just a guy who did my job. It’s never been about me; it was my job and I loved it.”

While Mr. David doesn’t see himself as a hero, we most certainly do. Without men like Scott David doing their jobs, we wouldn’t be free to do ours and we’re proud to have a sponsor like AREVA who makes a point of hiring veterans like him. Thank you Scott; it’s been our pleasure.