The facility’s new information flier highlights this progress from 56 percent complete in 2013 to 70 percent in January 2016, including

This is good news for fulfilling the United States’ nonproliferation agreement with Russia to each dispose of 34 metric tons of surplus weapons-grade plutonium. As stated in the Plutonium Management and Disposition Agreement (PMDA), the countries’ surplus plutonium must be changed at the isotopic level to render the nuclear material unattractive for weapons use. After much analysis, the Department of Energy committed to a MOX process as the U.S. method within the agreement.

Recent visits to the MOX Project site by U.S. nonproliferation leaders and congressional representatives confirmed the importance of fully funding and completing the facility as soon as possible.

Former Senator Richard Lugar toured the MOX Project site earlier this month and called on the Department of Energy to finish the job, saying,

“Finishing the job at MOX is the most prudent approach. Major construction is nearing completion. Much of the sophisticated instruments and equipment that will populate the building is already on site, and it will be tested before installation to ensure it is working properly.”

“This is a necessary piece of a comprehensive national security plan, and was reauthorized and funded by Congress again late last year. As the only real solution I see for our military grade plutonium, the MOX project is vital.”

Though considerations have been raised about pursuing other nonproliferation options, none of the other methods change the plutonium’s isotopic structure, so would require renegotiations with the Russians. Recent analyses also revealed significant concerns with other proposals, as described in this Reuters article: Switching plans on U.S. plutonium disposal costly, risky.

With a defined path for completion and international agreements in place, the MOX Project remains the best method to fulfill the United States’ nonproliferation obligations. 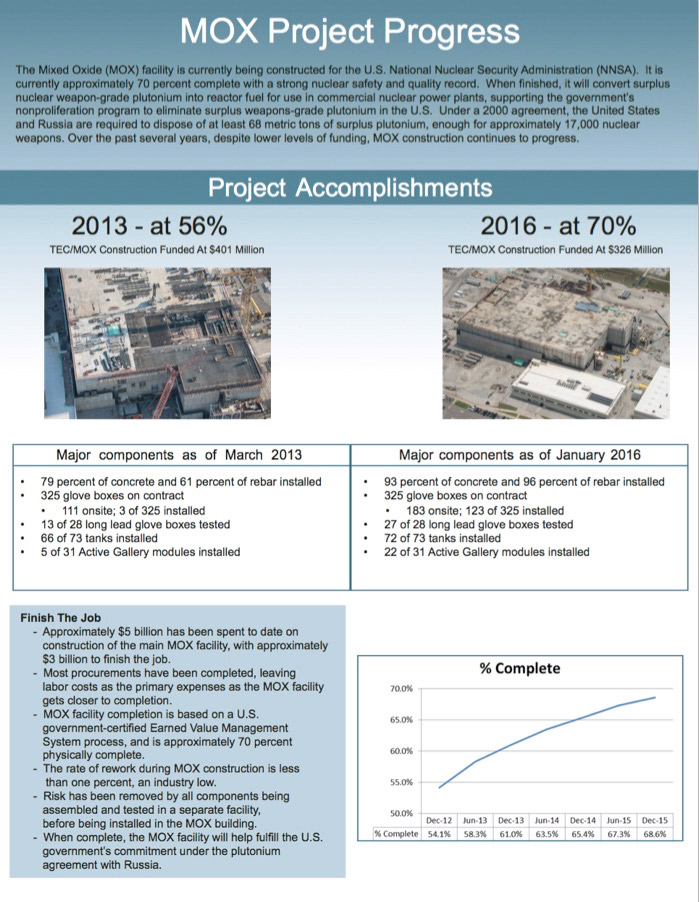