Recent reports of complications with proposed U.S. nuclear power projects have got opponents crowing that the nuclear renaissance is dead. Unfortunately for them, nothing is further from the truth.

As nuclear deniers trot out more pseudo-evidence to support their claim, the fact remains that more than 50 new reactors are under construction worldwide and many, many more are in the pipeline. China alone is building 24 new nuclear power plants as we speak.

But, the danger is that misinformation spread by ideological opponents of nuclear energy could hamper its expansion in the United States and slow our nation’s transition away from fossil fuels to a clean energy future.

The construction of new nuclear projects offers many benefits. For example, a new U.S. EPR reactor project would create some 10,000 direct and indirect jobs and spur billions of dollars of investment for the region where it is located. It would also produce clean, reliable electricity for 1.6 million households. Compared to a coal plant of similar output, a U.S. EPR reactor would prevent 10 million tons of CO2 emissions per year.

According to the U.S. Energy Information Administration, nuclear energy today produces 20% of our nation’s electricity but provides 70% of the power generation without carbon emissions. Renewable generation, excluding large-scale hydropower, has been growing rapidly and now provides about 3% of our electricity. 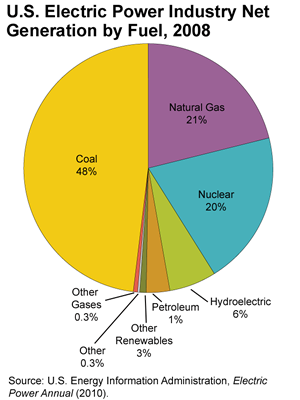 But, coal still produces about 50% of our electricity. Natural gas emits about half the carbon of coal, and yet its share of our nation’s electricity has increased dramatically and is now above 20%.

A significant portion of the new electricity generation brought online over the past two decades has been gas-fired plants. Now that some believe that cheap natural gas is here to stay, it makes investment in clean energy, such as nuclear energy and renewables, that much more difficult. So how can we reduce our dependence on fossil fuels?

And how can we support the expansion of clean energy technologies, such as nuclear energy and renewables, in the near term given the difficult economic environment? Other countries are moving forward decisively with investments in clean energy infrastructure – an investment that will pay dividends for decades to come. But, the later we start, the later we will see the dividends.