Jobs and renewable energy were the topics of conversation during a roundtable in Hamilton County, Florida last week. Local officials and residents joined representatives from AREVA and Duke Energy, to talk about the impact that the planned ADAGE biopower facility will have in the area. 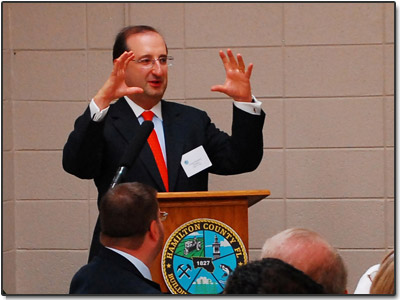 A joint venture between AREVA and Duke Energy, ADAGE is the first partnership in the United States between two major companies to develop new facilities based on biopower─ biomass to electricity. Using local clean wood byproducts and residue as fuel, this planned biopower facility in Hamilton County will create a significant impact on the surrounding communities, producing both clean energy and much-needed jobs.

During the construction and initial operation phases, the facility is expected to create roughly 700 direct and indirect jobs throughout the community. These job estimates provided by Dr. Julie Harrington, an independent economist and Director of Florida State University’s Center for Economic Forecasting and Analysis, also show a $105 million direct impact on the local economy in the first 2.5 years. After full startup, she estimates that it will create 24 direct operation jobs, at least 100 fuel supply jobs, and 150 indirect jobs in the local economy. Representative Leonard Bembry (D-Madison) added that “following the construction period, the facility will provide over $70 million in economic impact every year.”

ADAGE expects to break ground in 2010 on the facility and to have it up and running by as early as mid-2012. When fully operational, the facility will produce 50 Megawatts of renewable energy, enough to power 40,000 homes.

During the roundtable, ADAGE president Reed Wills shared his thoughts about the project saying, “Together, we can create renewable energy for homes and businesses while also creating local jobs─ a win-win for Hamilton County and Florida’s energy future.”