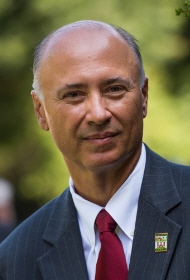 This op-ed originally appeared in the Providence Journal, March 31, 2014.

Since the beginning of the year, cities across the country have experienced unusually frigid temperatures and severe winter weather on several occasions. Along with this cold comes an increase in energy demand as heating systems are forced to work overtime to keep homes and businesses warm. While other energy sources often struggle to keep up with this demand, nuclear energy facilities have proven their ability to reliably meet it, providing much-needed stability to the energy grid and power to our homes and businesses.

In fact, a Jan. 7 article in the Hartford Business Journal noted that nuclear energy was New England’s top source of electricity when the polar vortex swirled through the region in early January and natural gas power plants struggled to keep up with the demand. I expect we’ll see nuclear energy facilities rise to the challenge once again when we look back on this most recent bout of cold temperatures.

With our need for energy growing, not just during cold weather snaps, we need a reliable, diverse energy mix that prioritizes low-carbon energy sources to improve public health and reduce emissions. Nuclear energy currently accounts for approximately 20 percent of U.S. electricity and 63.3 percent of emissions-free electricity.

Increased energy grid stability and reliability are some of the more well-known benefits of nuclear energy, but its positive contributions to public health are too often overlooked. In fact, last year NASA scientists James Hansen and Pushker Kharecha published a study that found that global nuclear power has prevented an average of 1.8 million air pollution-related deaths that would otherwise have resulted from the burning of fossil fuels. Hansen and Kharecha noted that, if nuclear energy technologies replaced fossil fuels on a large scale, that number could grow to 7 million lives saved over the next 40 years.

According to the Nuclear Energy Institute, nuclear energy facilities avoided the equivalent production of 570 million metric tons of carbon dioxide emissions in 2012 in the United States. This is nearly equivalent to the amount of carbon dioxide that is released annually from 110 million cars. As the only reliable, round-the-clock, base load source for generating large amounts of low-carbon energy, nuclear energy needs to play a greater role in U.S. energy policy.

As we increasingly turn to nuclear energy to help us safely and reliably power our homes and business today and into the future, the industry is also investing in building the next generation of nuclear energy facilities and extending the operations of the existing reactor fleet. At AREVA Inc., we refer to this as the daily renewal of nuclear energy.

During the past 30 years, the more than 100 existing U.S. nuclear reactors and tens of thousands of American nuclear energy professionals have not sat idle. In fact, their work has led to the increased output of the existing fleet while maintaining safe and secure operations. The industry accomplished this by continually upgrading technology and capabilities, and those activities continue today. For instance, AREVA Inc. has successfully completed the installation of a digital instrumentation and control system at a U.S. nuclear energy facility. This advanced technology modernizes the equipment of the current nuclear fleet, which improves plant safety, reliability and longevity.

To have reliable and affordable electricity, we need a diverse mix of energy sources here in the United States. Nuclear energy has proven to be a reliable source of energy that not only has the ability to operate continuously when we need it most, but also helps provide for a healthier future. Domestic nuclear energy should play a more significant role in U.S. energy policy, and it’s time for our policymakers to take action to support an energy source that provides for both energy stability and reliability while protecting our public health.

Mike Rencheck is president and chief executive officer of AREVA Inc., a company involved in nuclear energy and other low-carbon power generation.