Despite recent negative reports in the media, Saskatchewan is the most supportive province in Canada for the nuclear industry.  These results from recent polls showing support for nuclear energy and uranium mining are no surprise to Saskatchewan industry.  We run our own polls twice a year and have data going back into the 1990s.  Basically, Saskatchewan residents are nuts about uranium mining, with public support ranging as high as 84% and not going below 70% anytime in the past decade.  There is not a politician or an interest group in the world that wouldn’t be happy with these results! 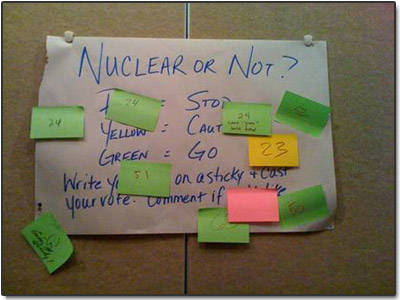 At a My Future Is Here town hall meeting, attendants were asked to post their age and opinion on nuclear power.

In addition to supporting uranium mining, Saskatchewan residents demonstrate a high level of trust in both AREVA and Cameco to do their jobs properly.  The majority of Saskatchewan residents also support nuclear power, isotope/research reactor development, uranium enrichment/conversion and even nuclear waste management in the province.  When supporters are asked if they would also support the location of a nuclear facility in a suitable location in their community, the majority say “yes.”  Interestingly, during the Uranium Development Partnership hearings and wild discussions on isotope production, support for a research/isotope reactor in the province climbed to 75%.