Powering Up Offshore Wind in the U.S. 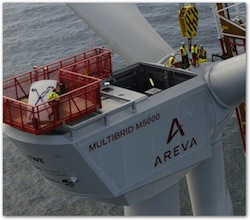 Within the last few days and months, we’ve seen significant progress on multiple fronts in multiple states on the East Coast.

Progress is good, especially since—as the manufacturer of a 5MW offshore wind turbine —AREVA’s commitment to establish a U.S. supply chain parallels the evolving multi-gigawatt U.S. offshore wind industry. We’ve done it already in Germany’s North Sea, with over 800MW in the pipeline.

“Massive oil spills, rising gasoline prices, and poor air quality can all be attributed to our addiction to harmful polluting fossil fuels. The time to act is NOW. Clean, stable, renewable wind energy is a much needed part of Long Island’s next energy mix. LIPA needs to advance large-scale wind to help us meet our clean energy goals,” stated Adrienne Esposito, Executive Director, Citizens Campaign for the Environment.”

Maryland: Governor O-Malley advanced offshore wind with consideration of the Maryland Offshore Wind Energy Act, which would guarantee revenue for a 500-megawatt offshore wind farm. Though paused at the moment, hopes are to pass it in the next session.

North Carolina: The just introduced Offshore Wind Jobs and Economic Development Act would make long-term contracts with state utilities to purchase 2,500 megawatts of offshore wind expected to come online in the next 10 years.

“the first-ever unsolicited right-of-way application with the Department of Interior’s Bureau of Ocean Energy Management (BOEM) for the use of certain areas of the U.S. Outer Continental Shelf (OCS) to construct an offshore transmission system.”

Now that’s progress—albeit down a long road—but progress, none the less.

The big question now is not if, but when: When will these states launch their projects? Which states will achieve first-mover benefits, and which ones will fall behind? After Massachusetts, what’s your guess on the lineup?