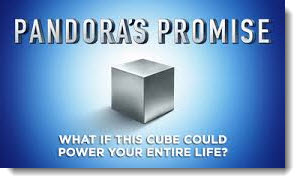 Following a successful debut at the Sundance Film Festival and screenings across the United States and in larger Canadian centers, Pandora’s Promise premiered in Saskatoon at the Roxy Theatre on Oct. 1. Showing to a near-full capacity crowd, the documentary provided a compelling conversation about nuclear power, climate change and how we can responsibly power our world. After the film, a panel debated the merits of nuclear energy in Canada and internationally.

The documentary, by Academy Award-nominated filmmaker Robert Stone, tells the intensely personal stories of environmentalists, including Stewart Brand, Gwyneth Cravens, Mark Lynas and Michael Shellenberger, and energy experts who have undergone a radical conversion from being fiercely anti to strongly pro-nuclear energy, risking their careers and reputations in the process.

The film also considers the critical role that nuclear energy can play in helping fight climate change, because, it bears mention once more, that nuclear power plants generate electricity without producing greenhouse gases.

In her opening remarks, the CNA’s Kleb explained Canada’s nuclear energy sector has “over 40 years of safe operations. No member of the public has ever been harmed by activities at one of our facilities. We are actually known around the world for our safety record.”

“We produce virtually no greenhouse gases and therefore do not contribute to the production of smog, or climate change,” Kleb said. “We produce power around the clock – we reliably provide 24/7 baseload power.
OCI’s Oberth cited the success of nuclear energy in Ontario. “Because nuclear energy produces more than 50 percent of Ontario’s electricity, per capita emissions are 80 grams/kilowatt-hour, which is among the lowest of any area in the developed world,” Oberth said.

Many AREVA and Cameco employees as well as many other Saskatoon area residents attended the Oct.1 event; another screening at the Roxy Theatre is scheduled for Oct. 10 at 7 pm.

Scott Larson of the Saskatoon StarPhoenix recently spoke with director Robert Stone and published a transcript of their discussion.

We encourage you to go see the movie, and join in the clean air energy discussion.