What’s next for nuclear reactors in the United States? Rebecca Smith of the Wall Street Journal just tackled the answer to this question.  Her recent piece, “The New Nukes,” took a look at what’s being developed for the new nuclear reactors and how they are going to “be safer, cheaper, and more efficient than current plants.”

With the majority of Americans seeing nuclear energy as a safe and effective way to battle climate change, Smith puts forward that “if there were ever a time that seemed ripe for nuclear energy in the U.S., it’s now.” Her piece took a fare look at the three key areas ─cost, safety, and waste─ where the nuclear industry has been vulnerable, but is now working to solve with development and deployment of a new generation of nuclear reactors. 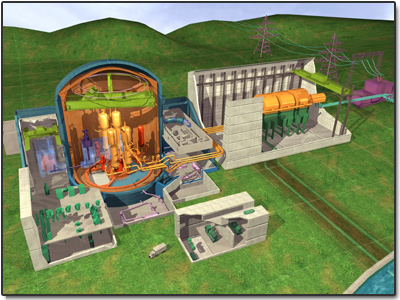 Even with past accidents, the safety record of the nuclear energy industry has proved this image wrong by maintaining a rigorous safety program over the past 30 years.  This next generation currently being developed, the Generation III + reactors, “take everything that’s been learned about safe operations and do it even better.”

“Generation III plants cut down on some of that infrastructure and rely more heavily on passive systems that don’t need human intervention to keep the reactor in a safe condition—reducing the chance of an accident caused by operator error or equipment failure.”

One example discussed was AREVA’s EPR™ reactor whose safety features include upgraded active and passive safety systems and a double containment building.  Smith also pointed out that skeptical Union of Concerned Scientists have named it the “only design that is less vulnerable to a serious accident that today’s operating reactors.”

And just as safety has improved with new technology and design developments, so has the cost of new nuclear plants.  They are extending the traditional life of the plants to at least 60 years, and “the new plants are also designed to be much simpler and quicker to build, reducing financing costs by potentially hundreds of millions of dollars.”

The issues regarding what do to with the used nuclear fuel include more options than building a permanent storage facility.  One possibility Smith mentions is the Generation IV fast reactors which are “designed to burn previously used fuel.”

We would like to mention another option for capturing all of the potential energy still remaining in used fuel─ recycling.  For more than 30 years at AREVA’s La Hague facility, we have been recycling used fuel in a process that exponentially reduces the volume of waste for disposal and allows some of the material to be used again as reactor fuel.

Read the whole article for the complete picture.  And be sure to check out the comments posted by readers where the discussion on nuclear energy continues.

To find out more on AREVA’s EPR™ for the United States, check it out on our website.