Over at the Washington Post‘s Wonkblog, Chris Mooney writes about a new letter from 71 ecologists and conservation researchers urging the conservation and environmental community to support nuclear power as part of the solution to achieve nations’ emissions reduction and climate goals.

Although renewable energy sources like wind and solar will likely make increasing contributions to future energy production, these technology options face real-world problems of scalability, cost, material and land use, meaning that it is too risky to rely on them as the only alternatives to fossil fuels. Nuclear power—being by far the most compact and energy-dense of sources—could also make a major, and perhaps leading, contribution. As scientists, we declare that an evidence-based approach to future energy production is an essential component of securing biodiversity’s future and cannot be ignored. It is time that conservationists make their voices heard in this policy arena.

We’re especially pleased with the letter’s emphasis that the best kind of nuclear power solution utilizes “complete fuel recycling,” and it’s a solution that can be expanded today. 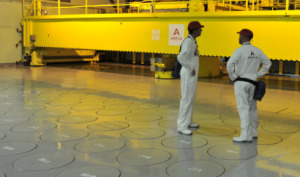 France’s 58 nuclear reactors generate about 74% of the country’s electricity. After reprocessing, the remaining nuclear waste from 40 years of operations is vitrified and stored in this single facility the size of a football field. Source: AREVA / TAILLAT JEAN-MARIE

As the world’s leading innovators in the field of nuclear fuel recycling, we agree that it’s an especially effective method to complete the nuclear fuel cycle by recycling 96% of the radioactive material, and extracting even more carbon-free energy out of every gram of nuclear fuel. The recycling process also accomplishes a fivefold reduction in the physical size of the nuclear waste to be stored.

With more than 30 years of safely reprocessing nuclear fuel, AREVA has shown this approach is also a secure method to reuse the small percentage of plutonium in the fuel. Since 1996, AREVA’s recycling facilities in France have provided material for manufacturing 4,000 mixed oxide (MOX) nuclear fuel assemblies, representing the reprocessing of more than 13,000 tons of used fuel and more than 130 tons of plutonium. In France, there are 24 reactors authorized to load MOX fuel, and more than 10% of nuclear electricity is produced using this fuel today. In the U.S., the MOX Fuel Fabrication Facility (also called the MOX Project) is 63% constructed and slated to eliminate 34 tons of surplus U.S. weapons-grade plutonium by permanently recycling and downblending it into nuclear fuel for American reactors. This nonproliferation project follows the successful so-called Megatons to Megawatts program where 500 tons of Russian weapons-grade uranium was permanently downblended into nuclear fuel, purchased for use in U.S. reactors, and generated 10% of the electricity used in American homes.

Be sure to read the entire letter at Brave New Climate.