Nuclear on the National Agenda

This political season provides a rare opportunity to engage our elected representatives in an energy discussion on the national stage. 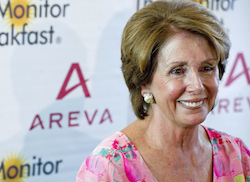 To spark this conversation, AREVA hosted media events at both conventions, first with House of Representatives Speaker John Boehner, and then today with Minority House Leader Nancy Pelosi.

Both representatives referenced their parties’ support for clean energy—nuclear energy is in both the Republican and Democrat platforms—and the need for cooperative efforts to achieve it.

Both parties are discussing “all of the above” national energy strategies to achieve an agenda of economic and environmental goals, though they have varying priorities. As Minority Leader Pelosi said this morning,

“If you don’t have an agenda, if your agenda is “Do nothing,” there’s nothing to negotiate. Better that you have an opponent with a full agenda.”

As both party platforms indicate, their energy agendas include a solid national foundation of low carbon nuclear energy. With that foundation, America can make the best use of our regional renewable energies.

We have long held the position that nuclear isn’t the only solution, but it must be part of the solution to provide everyone access to safe, clean and affordable electricity.

Minority Leader Pelosi also emphasized the cooperative value of a long-term energy vision, noting how her party negotiated an energy agreement with its own members, and then with President Bush to pass the Energy Policy Act of 2005. The same legislation was recently used by President Obama to advance automotive fuel efficiency standards for the first time in 32 years.

We applaud these efforts to develop long-term energy strategies. As we stated in our earlier post with Speaker Boehner, “Such a visionary plan achieves our [national] environmental and energy goals while spurring U.S. jobs and economic growth, and regaining global technology leadership.”

These goals are goals we all want, and as Minority Leader Pelosi concluded,

“And so, if they had something they want, then you can make some kind of an agreement. Nobody was elected monarch. We all have to compromise on these things. Not our principles, but some of our timing of our goals.”