Antinuclear activists lately have been trotting out that old chestnut that nuclear energy is not really CO2-free and that this claim is some type of deception. Here’s the short version: nuclear power plants do not produce CO2 while they are producing electricity. For each new AREVA EPR™ reactor that we build, we can avoid 10 million tons of CO2 emissions per year compared to a coal-fired plant. 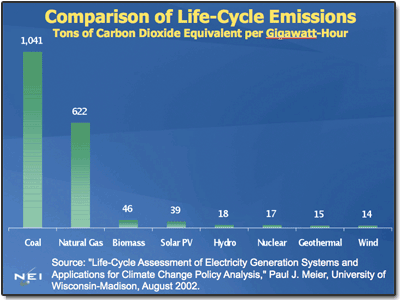 Here’s the longer version: all power sources, including nuclear energy, renewables, fossil fuels and everything else, produce CO2 at various points during their respective lifecycles. There are emissions during the construction of new facilities, manufacturing of components, obtaining and refining the fuel, transportation to and from the facility, and so on. On the basis of lifecycle emissions, there is no energy source that does not produce some CO2 emissions when one includes full lifecycle and all related activities.

This should take nothing away from renewables – AREVA supports renewables. We are currently installing our M5000 offshore wind turbines off the coast of Germany and recently announced an agreement to build 80 more. These 5 MW turbines are the world’s biggest, and we hope to build hundreds of them around the world, including here in North America.

The point is that nuclear energy and renewables are complementary and are key elements in helping us move toward a low-carbon future. Anti-nukes seem to believe that a dollar spent on nuclear energy is a dollar taken away from renewables. This is not true. We need to begin investing more in both if we are serious about addressing our energy and climate change goals.