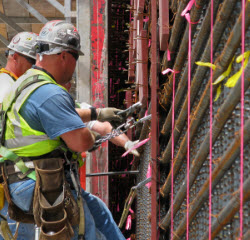 Recent government reports tallying the lifecycle costs of the entire U.S. surplus weapons plutonium disposition program have been improperly applied by commenters to a single project within the program called the mixed oxide fuel fabrication facility (MFFF), or MOX Project, under construction in South Carolina.

Selected by the U.S. Department of Energy as the best option to fulfill the United States’ nonproliferation obligation, the MOX Project facility is more than 60% complete and on track for delivery at the projected remaining $4 billion expense. Under the management of Shaw-AREVA MOX Services, constructing the MOX Project has played a key role in national and regional economies by re-establishing a U.S. nuclear energy supply chain that, for the first time in more than 20 years, has trained and employed thousands of skilled American craft workers in a variety of suppliers across multiple states.

This same highly skilled MOX Project American workforce has nearly compiled a notable 18 million safe work hours, and fulfilled every regulatory and environmental requirement – a significant accomplishment for such a large construction project. For example, for four years in a row, the National Regulatory Commission (NRC) reviews have been entirely positive and – with the requirements of more than 50 permits and licenses to meet – there have been no environmental violations since site preparation work started.

The MOX Project, as part of the U.S. plutonium disposition program, will deliver a crucial component of America’s international nonproliferation agreement with Russia, but it is not the only project in the disposition program. There are multiple significant projects represented in the reported program’s lifecycle sum, as well as the costs of DOE to oversee the various projects.

Commenters lumping all of these program lifecycle expenses under the single heading of the MOX Project are sowing confusion and uncertainty, and incorrectly representing the value of this important nonproliferation mission.

The MOX Project needs to be completed as part of the over-arching plutonium disposition program to honor America’s agreement, deliver on its crucial security mission, and serve as an example of international cooperation and technological achievement. And most importantly, fulfilling our nonproliferation obligation demonstrates that the United States still leads, still delivers, and still pursues actions to make the world a better place.