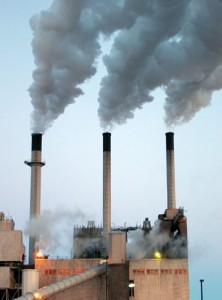 We noticed with some surprise, this article in the Washington Post this week.. It reports: “Utilities across the country are building dozens of old-style coal plants that will cement the industry’s standing as the largest industrial source of climate-changing gases for years to come.”

In short, the article documents that a wave of at least 15 new coal plants will be produced in the U.S., this “despite growing public wariness over the high environmental and social costs of fossil fuels, demonstrated by mine disasters in West Virginia and the gulf oil spill.” This is the largest expansion of coal plants in two decades.

The short-term financial gain of building cheap fossil plants doesn’t have a “clean coal” solution anywhere in sight either as “widespread application of carbon-neutralizing technologies for coal plants remains at least 15 to 20 years away.” The article specifically goes into the hidden long-term costs this will bring as these new plants would “generate about 125 million tons of greenhouse gases annually, according to emissions figures from utilities and the Center for Global Development. That’s the equivalent of putting 22 million additional automobiles on the road.”

And by way of comparison, an AREVA EPR nuclear plant would avoid about 10 million tons of CO2 per year each year from being emitted into our air.