By Anne Lauvergeon, CEO of AREVA and Jim Rogers, CEO of Duke Energy 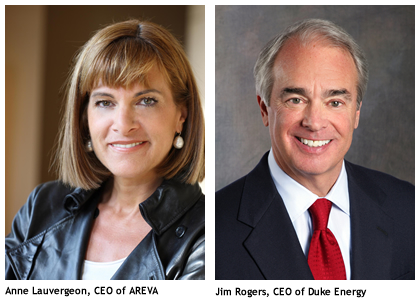 This originally appeared in today’s issue of The Energy Daily.

President Obama refused to take no for an answer as he negotiated with world leaders during the recent UN climate conference in Copenhagen to set a new course for battling climate change.

Certainly there were many challenges when leaders from 193 nations attempted to establish goals to reduce greenhouse gas emissions.

Frankly, the idea that a two-week conference could come up with a plan to curb greenhouse gas emissions was a tall order. The hope was the Copenhagen conference would help build the framework for a lasting agreement. As Fred Krupp of the Environmental Defense Fund put it, “This is the normal rhythm of international negotiations.”

It appears President Obama, working in concert with other world leaders, was able to come up with an acceptable starting point.

There is no simple answer to this complex issue, just as there is no silver bullet for developing a sustainable world energy mix capable of producing more energy with less carbon emissions in a competitive manner.

Copenhagen, although not as successful as many hoped, showed the importance of national leaders working together to create a ladder of cooperation through which an agreement can be hammered out.

As world energy demand grows, providing security of supply, fair competition and environmental sustainability means improving our current and future energy systems with a good dose of “innovative thinking,” free of prejudice and ideologies. It means developing a new vision and partnerships to provide a sustainable answer to climate change and how we generate and use energy.

Some countries have stepped up to demonstrate their willingness to take action and are expected to formalize their commitments in the coming months in a Copenhagen accord.

Japanese Prime Minister Yukio Hatoyama set the ambitious objective of a 25 percent reduction of his country’s greenhouse gas emissions by 2020.On a bilateral level, Presidents Nicolas Sarkozy of France and Luis Inacio Lula da Silva of Brazil worked together to get everybody on board.

Developed nations also agreed to mobilize $100 billion annually from public and private sources beginning in 2020 to fund sustainable development, mitigation and adaptation in developing countries, if they agree to verifiable emission targets. Our expectation is that this will be accomplished primarily through market-based approaches.

China and India agreed to substantially reduce the carbon intensity of their economies by 2020.

The fact that representatives from so many countries and organizations were willing to meet in Copenhagen is clear proof of their willingness and desire to work together. AREVA and Duke Energy stand ready to do their part.

Our two companies have formed a joint partnership called ADAGE to pursue the development of a series of 50-megawatt biopower plants in the United States that will use wood waste to produce electricity.

AREVA and Duke are also working together on the Southern Ohio Clean Energy Park Alliance to bring new nuclear generation to that region.

When it comes to nuclear energy, we cannot let emotional barriers stand in our way. There are certainly issues that must be dealt with, including spent fuel disposal, but nuclear generation is the only generation that can operate around the clock and emits no greenhouse gases. We have proven its safety, reliability and cost effectiveness over the past several decades. It should be fundamental to our energy strategy.

Fighting climate change and making our energy systems more secure are both a strategic and ethical directive for the business world. It is about more than showing awareness on the unquestionable reality of climate change. It’s about demonstrating the commitment, swiftness and imagination to change the course of events and make the right investments.

The private sector cannot do it alone. We need our governments to forge a coordinated action plan that favors sustainable development and recognizes that solutions to our economic, energy and climate realities go hand in hand in hand.

Choosing clean and affordable energy means developing our industrial capabilities, to drive sustainable growth and job creation for our communities and the world’s economy. Climate legislation that puts a price on greenhouse gas emissions will jumpstart the development of cleaner energy and make it more competitive with fossil fuels.

If we are to meet the challenge of dealing with climate change, the international community must continue to work together to build that ladder of cooperation — rung-by-rung — until a viable solution is achieved.

Copenhagen demonstrated that world leaders are willing to work together toward a solution. Several of the world’s largest industries also voiced their support in the effort.

That’s at least a good beginning.