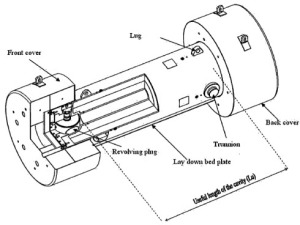 Eight years ago, these FUTURIX-FTA fuel pins were sent to France for irradiation in a fast breeder reactor to simulate the conditions of a next-generation fast reactor. Meanwhile, a comparable set of four pins were placed inside INL’s Advanced Test Reactor (ATR), which was modified to simulate the similar fuel conditions as in the French fast reactor. Now that they have returned, the INL Transmutation Fuels team will analyze the two sets of fuel pins, and hopefully validate the ability of INL’s reactor to accurately simulate the fuel behavior typical in a fast breeder reactor.

Key to the success of the return shipment was AREVA TN’s engineering and nuclear logistics teams’ expertise in international transportation of nuclear and radioactive materials. This trans-Atlantic and cross-country voyage required months of upfront engineering and coordination work with the French Alternative Energies and Atomic Energy Commission (CEA), the U.S. Department of Energy (DOE), regulatory authorities, and other stakeholders to ensure the nuclear transport was performed safely and securely.

The TN-106 package is extensively used in Europe for transporting experiments between labs, and was validated by the U.S. Department of Transportation for this transport into or out of the United States. This was the first use of the TN-106 in North America, and the transport cask proved to be well adapted to the unloading operations in INL’s Hot Fuel Examination Facility (HFEF). The TN-106 package is part of a large family of nuclear transport packages developed, licensed and operated by AREVA TN to support research communities around the world. New AREVA TN transport packages, such as the TN-LC (“Long Cask”), are designed to meet emerging global transport needs.

As the transported FUTURIX-FTA pins are similar to INL’s ATR pins, researchers can continue to use their ATR method to study new fuels and advance the goals of the Transmutation Fuels program. At the same time, these pins are part of a research effort to evaluate the option of recycling used nuclear fuel in the U.S. and reduce storage volume needed in a permanent disposal facility.

Currently, only about 5 percent of the uranium in a reactor is actually consumed to produce energy. The remaining uranium goes unused. This is because light water reactors, the type of reactor found most predominantly in the world today, can only fission U235, a less plentiful isotope of uranium. However, the [next-generation fast reactor] can generate the energy necessary to fission the more abundant U238. About 20 fast reactors exist in the world today. Over the past 10 years, the INL Transmutation Fuels team has tested hundreds of different fuel compositions that mimic what recycled used nuclear fuel could look like. They are searching for the fuel composition that offers the best results on both ends: efficient energy production in a fast reactor and reduced storage in a nuclear repository.

The AREVA TN team is proud that they were entrusted by INL and DOE to transport what may be the future for nuclear fuel. With another successful voyage under its belt, including its debut in the United States, the TN-106 cask is ready for its next trip!