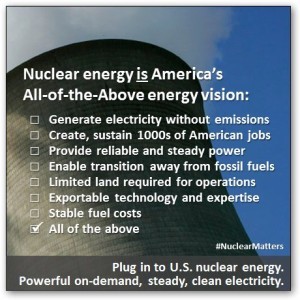 A recent comment received during an exchange on social media prompted a more lengthy consideration of common misunderstandings about modern nuclear energy. Hence, the following post.

We appreciate opportunities to address concerns about nuclear energy. As with any complex topic, tapping into science-based, peer-reviewed expert resources is a good way to foster reasonable open discussion and develop a better understanding of the issues. Given that–we encourage readers to consider the content and links included below for additional information about nuclear energy.

First, let’s start with the understanding that to achieve and maintain a healthy standard of living, people must have easy access to lots of steady, reliable energy–as recent commentary by The Breakthrough Institute clearly demonstrates. This fact trims our current electricity generation options to on-demand fossil fuel power plants or nuclear energy. Renewable energy is an important part of the energy mix, but by itself has not yet achieved the ability to provide on-demand electricity to power critical needs, for example: hospitals, industry, government facilities. This is why renewable energy facilities are often backed up with fossil fuel generators, like natural gas.

So, we have a choice: continue using fossil fuels with waste streams released into our environment, or increase clean air nuclear energy with its managed waste stream. More on that waste stream in a moment.

Concern: Nuclear energy has to solve the problem with long-lasting radioactive waste, including plutonium.

Consider: One feature about used nuclear fuel is that 96% of it can be recycled into new fuel, including the plutonium–as some European countries, Japan, and Russia have been doing for as much as 38 years. The remaining 4% is securely stored. As an example, France recycles the used nuclear fuel from its reactor fleet generating 75% of its total electricity. After recycling, the remaining vitrified waste from 50 years of French nuclear energy is stored in a single room the size of a football field. The “waste problem” has been solved; it’s only waste if you waste it. Recycling used nuclear fuel is still just a matter of national policy.

Consider: The U.S. nuclear energy industry operates under the most stringent environmental regulations in the world, as continuously assessed and evaluated by the U.S. Nuclear Regulatory Commission. Unlike other on-demand electricity generators, the normal operations of nuclear energy facilities do not release harmful amounts of any substance into the environment, including radiation. You can compare the environmental impact from different electricity generators on this Environmental Protection Agency web page.

Concern: Didn’t the WIPP facility in New Mexico release dangerous amounts of radiation and affect people and the environment?

Consider: A notable aspect of the nuclear industry is the peer review and sharing of best practices that the industry imposes on itself. One example is the industry’s new FLEX strategy implemented to apply lessons learned after the Fukushima accident. The nuclear industry also has its own independent safety organization, INPO, to promote the highest levels of safety and reliability in the operation of commercial nuclear power plants. The unique WIPP situation highlighted the need to continue the review and ongoing improvement of safety processes. Most importantly, the incident had no lasting impact to the exposed 13 employees or the environment, as detailed here.

Concern: The hot steam from the top of a nuclear plant’s tower harms the environment.

Consider: The water vapor released by nuclear energy facilities is not significantly hot, nor does it negatively affect the environment. The clean water vapor coming from the easily recognized cooling tower seen at some nuclear energy facilities and fossil fuel power plants is drawn up through the internal cooling process by the tower’s hyperbolic shape, which creates an air flow from the tower’s open bottom to the open top. Much of the cooled water flows back down the inside of the tower and is reused. See this description by Duke Energy.

Concern: Uranium mines create a lasting impact on the environment and local population.

Consider: As with any mining operations, strict regulations limit impact to the environment and nearby populations. Our modern Canadian uranium mining operations have proven the safe and successful cycle of mining the resources and then returning the site to a natural environment.

Concern: Don’t nuclear energy disasters show how dangerous it is?

Consider: On a global scale, the commercial nuclear energy industry maintains the safest operations record of any energy source. In all its history, there have been three major accidents, and only Chernobyl directly caused regional fatalities. Learn more about each one–Chernobyl, Three Mile Island, and Fukushima. At the same time, all of us in the U.S. nuclear energy industry recognize that the unmatched safe performance of the past has only so much value. We must earn the public’s trust every day by putting safety first and foremost in our daily commitment to operational excellence.

Learn more about nuclear energy on our website and the Nuclear Matters resource site.