The NASA Mars Science Laboratory (MSL) was launched in the fall of 2011 to determine the planet’s habitability. On August 5, 2012 the MSL rover Curiosity made an incredible landing on the planet Mars and began operations. 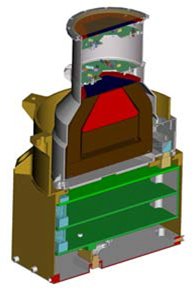 Equipment from AREVA-subsidiary CANBERRA was involved in both the MSL mission’s launch phase and the current exploration phase. During the launch, thirty CANBERRA ECAM systems and nine Radiagem 4000 survey meters with X-ray probes were deployed as part of the radiological emergency preparedness program. ECAM alpha beta environmental continuous air monitors positioned around Kennedy Space Center monitored for any unexpected release of radioactivity, and the Radiagem 4000-based units served as the program’s primary hand-held low-energy frisking devices.

On the planet’s surface, the Curiosity rover carries 10 scientific instruments, one of which is the Radiation Assessment Detector (RAD). About the size of a small toaster, the RAD includes 72 CANBERRA detectors to help measure and identify all high-energy radiation on the Martian surface, such as protons, energetic ions of various elements, neutrons and gamma rays.

To prepare for future human exploration, RAD is collecting data scientists will use to calculate the equivalent dose (a measure of the effect radiation has on humans) people would be exposed to on the surface of Mars. RAD will also assess the radiation hazard to potential microbial life, past and present, both on and beneath the Martian surface. In addition, RAD will investigate how radiation has affected the chemical and isotopic composition of Martian rocks and soils.

Congratulations to NASA on this historic achievement and to our CANBERRA teams who provided important equipment and support for the project. For more about Curiosity’s RAD equipment and capabilities, watch this Jet Propulsion Lab video.