Over at Neutron Bytes, blogger Dan Yurman posted on the national urgency and business opportunity for private companies proposing interim solutions to store used nuclear fuel. These consolidated interim storage facilities (CISF) would be a near-term solution toward the eventual opening of a permanent federal repository.

Why is opening a near-term CISF important? Dan gives both a financial and quantitative answer,

“Meanwhile, the Department of Energy paid out tens of millions in penalties to US nuclear utilities for not taking the spent fuel off their hands which was promised to them on the assumption that Yucca Mountain would be complete. So, all that spent fuel, some 70,000 tonnes of it, is still sitting at the nation’s 104 nuclear reactors waiting for a new home.”

He also describes how decommissioned reactor sites are a priority for moving the so-called “stranded fuel” from those communities,

“Reactor sites with spent fuel already in dry storage would be first in line, so to speak, for using either service. Early customers for either CISF could be the dozen or so sites where nuclear reactors have already been decommissioned such as Maine Yankee. More recently, four nuclear reactors are now entering the decommissioning phase of their life cycle. Two are in California, one is in Wisconsin, and one is in Vermont. Transportation to either site would be by rail.”

A best-case scenario would be for the CISF to complete government licensing and begin operations in time to directly receive used fuel from reactors that are now entering the decommissioning phase, without those reactor sites needing to construct or expand onsite used nuclear fuel storage systems. 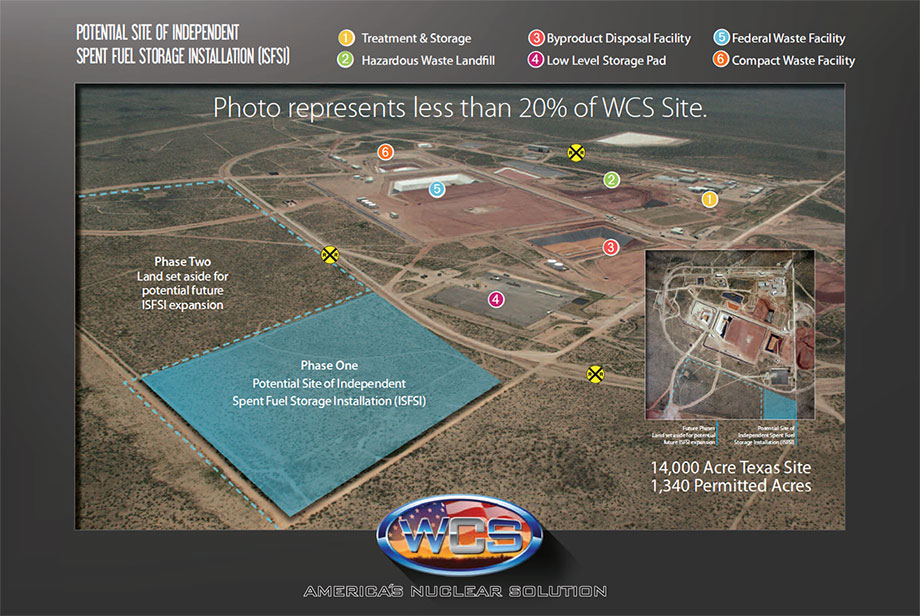 One of the CISF proposals is by a team of companies led by Waste Control Specialists (WCS) in Texas, and includes AREVA Inc. and NAC International. As Dan notes later in his blog post, Texas also recognizes the opportunity in serving the nation’s need for safe used fuel management,

“On the Texas side, the state government has provided support by approval of regulatory agencies for the site to accept LLW from other states. The local governments in west Texas have unanimously approved resolutions of support.”

These are just a few topics from Dan’s post, which also delves into the politics and potential energy value in developing a consolidated interim storage facility. Be sure to read the whole thing and …

Here are some unique aspects about the WCS proposal in Texas we’re supporting: