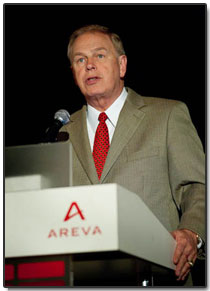 AREVA’s second U.S. Supplier Day in Columbus, Ohio, saw another capacity turnout with representatives from more than 100 companies from the state and region. AREVA held the event to find new partner companies to help supply and build U.S. EPR™ nuclear plants in the United States, including possibly one in southern Ohio, and other export opportunities around the world.

Several leading energy companies, including AREVA, formed an alliance in June to develop America’s first clean energy park project at a U.S. Department of Energy (DOE) site in Piketon, Ohio. The Southern Ohio Clean Energy Park Alliance will evaluate the DOE Portsmouth site as a potential location for a new nuclear power plant. The initial focus of the project is on AREVA’s U.S. EPR™ technology.

Ohio Gov. Ted Strickland kicked off the event last night with a strong endorsement of nuclear energy: “I have been pro-nuclear since before it was cool.” He added, “Frankly, if climate change is our next big challenge—and I believe it is—it is irresponsible to ignore the only source of baseload electricity that produces no carbon emissions.”

A new U.S. EPR™ project would create thousands of jobs and spur significant local investment, but such a project also would require hundreds of qualified suppliers and subcontractors. That’s the reason AREVA is holding its Supplier Days now.

“AREVA came to Ohio to look for partners to manufacture and supply the thousands of components and to build U.S. EPR™ nuclear plants that are truly ‘Made in America,’ and further realize our vision of revitalizing America’s energy infrastructure,” said Mike Rencheck, President and CEO of AREVA NP Inc. “We have been overwhelmed by the strong response to our call for partners.”

The Ohio Supplier Day is the second of our planned events; the first was held in Baltimore in November.