Nuclear is only one option, albeit a key one, among AREVA’s range of carbon-free energy choices. The group is developing synergistic solutions including a range of renewable energies that make sense in a balanced energy mix.

Renewable energy use is increasing worldwide. In emerging countries they supply inexpensive electricity from local resources. In Europe and North America they help reduce greenhouse gas emissions. Europe has set an objective of a 20% share for renewable energies in final energy consumption by 2020, and AREVA has technologies capable of supporting that growth.

The group is currently offering its customers a portfolio of four renewable energies: wind power, bioenergy, concentrated solar power, as well as next-generation hydrogen carrier and storage solutions. Several of these have already reached technical maturity, such as wind power and bio energies. They can still be improved in terms of yield and distribution. For example, following its acquisition of 51% of Multibrid in 2007, AREVA has developed pioneering technology to become a leader in the emerging offshore wind power market.

In bioenergy, AREVA is no. 1 in turnkey solutions. The group has built over 100 operating bioenergy power units all over the world, totaling more than 2,800 MWe of installed capacity. AREVA is also reshaping the hydrogen industry by providing CO2-free Hydrogen production. These solutions enable hydrogen to be generated via electrolysis and electricity from fuel cells, with no greenhouse gas emissions.

The cleanest energy is energy that is not used at all. AREVA is working to improve efficiency in both power generation and fuel supply. The aim is to maximize the availability of operating nuclear power plants to produce more energy with the same amount of fuel. It includes working to improve load factors at new reactors such as the state-of-the-art Generation III+ EPR™ reactor. 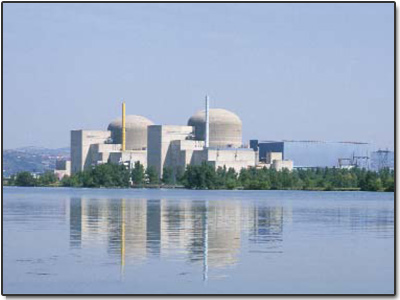 One advantage of this new generation of reactors is its fuel burn-up coefficient. Compared to the previous generation reactor, the EPR™ reduces uranium consumption by 15% for the same amount of electricity generated. In line with its commitment to sustainable development and environmental protection – by making energy more efficient – AREVA is also helping to conserve valuable resources by improving fuel management. Reusable uranium and plutonium are recovered from used fuel for recycling in nuclear reactors as MOX fuel (a mixture of the two materials) or as enriched reprocessed uranium (ERU). Using its advanced technologies, AREVA is therefore able to recycle 96% of the materials contained in used nuclear fuel which significantly reduces the volume and radiotoxicity of final waste to be disposed of. Through its recycling operation, under strict international safeguards, AREVA also supports non-proliferation objectives since used fuel is unloaded from a power plants it can be sent directly to recycling operations and MOX production, avoiding the accumulation and aging of used nuclear fuel at multiple reactor sites worldwide..

Waking to the Dangers

The world is finally awakening to the dangers of climate change, and as a global leader in solutions for CO2-free power generation AREVA is ready to offer its entire portfolio of energy solutions to solve the problems which will increasingly face its customers.

In July, leaders at G8 agreed to at least a 50% reduction in global greenhouse gas emissions by 2050, with developed countries achieving an 80% reduction to ensure that global average temperatures do not rise by more than 2ºC above preindustrial levels.

In October, U.S. Energy Secretary Steven Chu said Washington was “deeply committed” to finding a solution to climate change in the run-up to Copenhagen. “This is a fundamental trust we are about to break if we don’t act as aggressively as we can,” he told a meeting at the IEA in Paris. AREVA is well prepared to meet this challenge.