Climate change is a reality and some of its impacts may already be irreversible. The Catlin Arctic Survey team has found out that most of the ice in the region is first-year ice that will melt next summer. Within a decade, the North Pole will turn into an open sea every summer. Kashmir University’s geology and geophysics department says Indian Kashmir’s glaciers are melting fast because of rising temperatures, threatening the water supply of millions.

AREVA is aware of these challenges and leading the field in offering solutions for CO2-free power generation as delegates from 200 countries prepare to meet in Copenhagen in December, to hammer out a new climate agreement to replace the Kyoto Protocol whose first phase ends in 2012.

With world electricity demand expected to double by 2030, alternatives to fossil fuels must be applied whenever possible to ensure a balanced and reliable energy mix. AREVA is helping to achieve these goals by offering customers a wide-ranging portfolio of both nuclear and “renewable energy” solutions.

Yvo de Boer, Executive Secretary of the United Nations (UN) Framework Convention on Climate Change says he will be happy if the UN climate conference in Copenhagen (COP15) can deliver on “four essentials”:

Danish Minister for Climate and Energy Connie Hedegaard, incoming COP15 president, says Copenhagen is a “window of opportunity” which should not be missed. She is optimistic that after months of political stalemate key countries are now coming forward with new targets. “In that sense,” she says, “Copenhagen has already delivered results.” 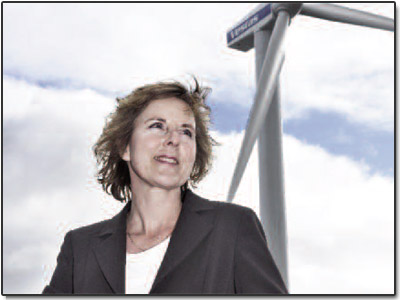 To achieve stabilisation of CO2 emissions by 2030, The International Energy Agency’s annual World Energy Outlook for 2009 divides the world into several sectors and considers policy options for each. It looks at what the power sector could achieve under “a plausible set of commitments and policies which could emerge.” The IEA suggests “much faster roll-out of renewables and nuclear including urgent investment in carbon capture and storage,” while the richest countries should “facilitate the transfer of low-carbon technologies – through international sector agreements and the purchase of carbon credits and other measures.”

This would need some $12 trillion beyond the ’business as usual’ scenario, mostly for investment in energy efficiency, modernization of transport and construction of low-carbon power generation. The cost would be offset by savings in pollution control amounting to $100 billion a year. Investment in nuclear power could be boosted by $125 billion in 2010-2020, increasing to $491 billion in the decade to 2030, says the IEA. This would be in addition to growth already planned for nuclear power and would save an extra 1.87 billion tons in emissions a year.

Nuclear isn’t the only solution for clean energy generation, but there is no solution without nuclear. As world leader in nuclear power and the only company to cover all industrial activities in this field, AREVA offers solutions throughout the nuclear fuel cycle. With more than forty years’ experience, its integrated business model in nuclear power is a major asset.

AREVA’s activities encompass everything from uranium exploration, mining and processing, reactor design, construction and maintenance, expended fuel and waste management. With this unique organization the group is able to meet the needs of utilities for CO2-free power generation.

Representing about 15% of the global electricity mix, nuclear power reduces the world’s emissions by almost 10% each year, avoiding the release of some 2.1 billion tons of CO2. Installed nuclear generating capacity will double by 2030, and AREVA is working to offer reactors suited to the requirements of each country.

AREVA is also developing next-generation fuel assemblies for light water reactors and, as part of an international research program, is working on Generation IV nuclear reactors, which are expected to increase power plant yields considerably.