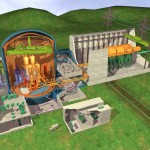 Last week, AREVA and Fresno Nuclear Energy Group (FNEG), LLC announced that they have signed a Letter of Intent to formalize their work together in the development of a nuclear power plant project for the Fresno, California area.

This Letter of Intent means that AREVA and Fresno Nuclear Energy Group will begin cooperation on the initial development and permitting process for one or possibly two of AREVA’s U.S. EPR™ plants, beginning with the preparation of the Early Site Permit and subsequent Combined License Application to be submitted to the U.S. Nuclear Regulatory Commission.

John Hutson, President of the Fresno Nuclear Energy Group commented how “AREVA shares our commitment to carbon-free, renewable energy; like us, they believe that nuclear is only part of the solution—AREVA is a world leader in designing wind, solar, geothermal and other renewable energy systems, as well.”

The objective of the Fresno Nuclear Energy Group is to provide an environmentally responsible source of electricity especially to develop the state’s critical agricultural industry and support wildlife preservations efforts that are so vital to the Central Valley of California.

And nuclear energy isn’t just an environmentally responsible energy option; a new U.S. EPR™ would create up to 11,000 direct and indirect jobs during component manufacturing (including AREVA’s Newport News heavy component facility in Virginia) and plant construction.  On top if this, construction and operation would also create more than 400 permanent jobs and spur billion of dollars in investment in the local economy.  When the U.S. EPR™ is up and running it would produce clean, reliable baseload electricity for more than 1.6 million homes.

For more information about this historic partnership for clean energy in California check out the Fresno Nuclear Energy Group, LLC, the U.S. EPR™ by AREVA, and official Press Release.