An Idea, A Patent, and 25 Years of Exceptional Performance

This week marks the 25th anniversary of the patent recognizing AREVA’s innovative FUELGUARD™ debris filter for nuclear fuel assemblies. What began as a line drawing of a designer’s idea was authenticated as novel and valuable with the examiner’s seal on U.S. Patent 5,030,412 issued July 9, 1991. The enduring value of this idea was confirmed when competitors imitated its central features after the original patent expired. 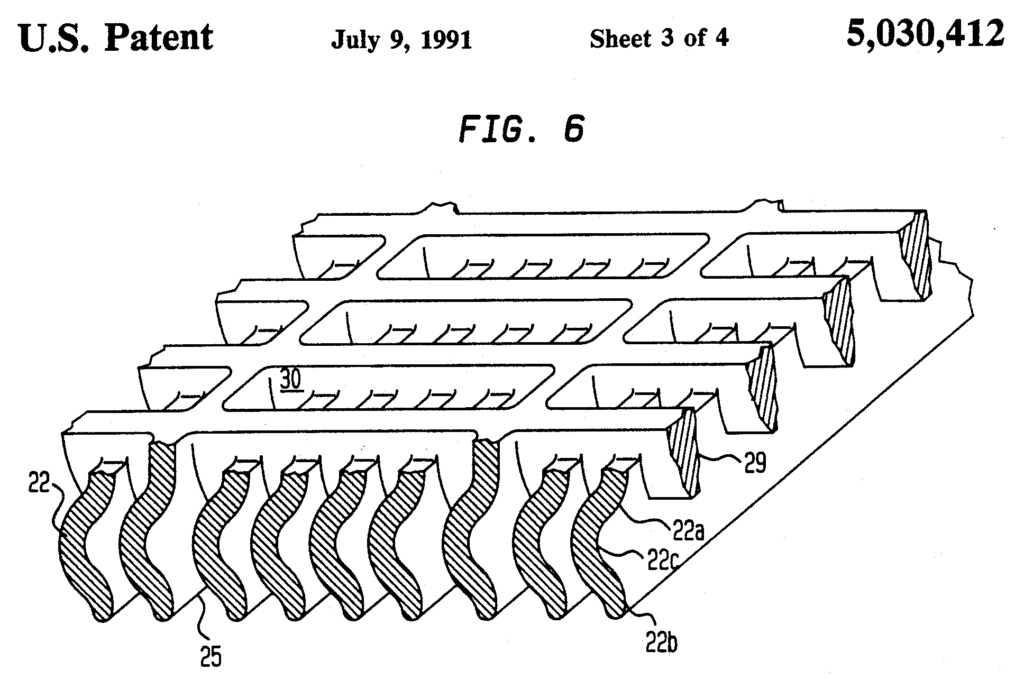 The FUELGUARD idea has since progressed through a second-generation (IFG) FUELGUARD and now is represented in the recently launched 3GFG, or third-generation FUELGUARD. During this time, 33 reactors worldwide with more than 22,000 FUELGUARD debris filters have delivered exceptional performance in defending fuel assemblies against debris failure in environments with known debris.

The FUELGUARD debris filter is a unique example where our expertise in both pressurized water reactor (PWR) and boiling water reactor (BWR) fuel led a cross-over solution that eliminated a common industry problem for both reactor types.

At the time of the FUELGUARD invention, many U.S. utilities were performing major system repairs and reliability upgrades to increase the amount of time their nuclear reactors generated electricity (capacity factor) from near 60 percent to today’s 90 percent and higher levels. These upgrade activities created potential risks for dropped debris from work performed above the reactor core and waste from machining and welding operations within the reactor vessel. Our team recognized our customers’ challenges and started drafting ideas. 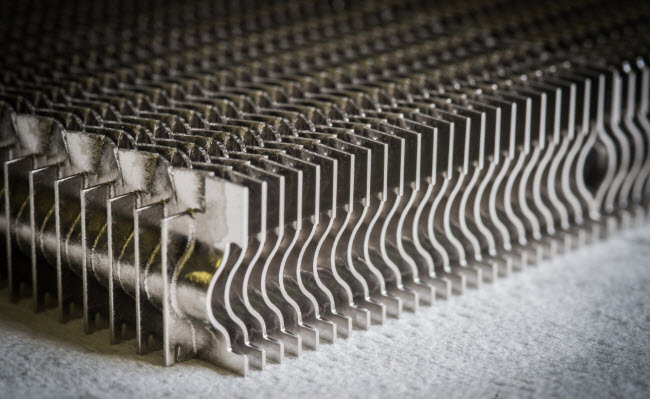 AREVA’s 3GFG filter traps all debris large enough to cause fretting damage and retains it for removal as fuel is replaced.

The innovative use of nested blades provided an ideal solution to block entry of solid debris, while freely allowing coolant to enter a fuel assembly. This invention for AREVA fuel was quickly adapted for use with Westinghouse, Combustion Engineering, and Siemens PWRs, and we then adapted and implemented the design for use on competitors’ fuel assemblies in mixed core operations to fully resolve our customers’ needs.

Following this PWR innovation, our research showed that the BWR environment, where coolant enters as a liquid but greatly expands as it converts to steam within the fuel assembly, created unique sensitivity to very small filamentary debris. Small wires broken from steel brushes and degraded wire-reinforced gaskets could freely pass through a filter and the lower half of the fuel assembly. In the upper half of the bundle where the coolant’s decreased density reduces buoyancy, the debris could be more readily trapped in a bundle’s spacer grid. Once trapped, the high steam flow velocity could cause fretting damage by vibrating the debris at a frequency sufficient to eventually wear through the fuel rod cladding containing the nuclear fuel pellets. With this knowledge in hand, AREVA developed and rapidly implemented an improvement as a second-generation design to block any wires large enough to become entrapped. This second generation design has been very successful in more than 5,000 fuel assemblies with no fretting caused by debris passing through the filter.

Most recently, as part of the development of the new BWR 11×11 array of our ATRIUM™ 11 fuel design, AREVA created the 3GFG debris filter. This third-generation design builds on the success of the earlier product by filtering to a level where any debris that may pass through the filter no longer has the length and mass necessary to cause fretting damage if entrapped.  Additionally, the 3GFG acts as more than just a barrier by physically entrapping debris at the filter entry, allowing it to be permanently removed from the reactor core as fuel is replaced.