In an excellent op-ed in the Wall Street Journal today, Hong Kong-based Christopher Stephens details the challenges facing Western nuclear energy companies in capitalizing on Asia’s nuclear renaissance. This of course includes companies like AREVA. The massive infrastructure investment in Asian countries such as China and India should be a boon for nuclear supplier, but he writes “success is far from assured.”

Asia ought to be a natural market for Western nuclear-generation giants like Westinghouse, General Electric and Areva. On the demand side, Asia’s desire for nuclear energy is only increasing. The world’s 440 nuclear reactors produce 14% of global electricity, but account for less than 1% in Asia, where coal- and gas-fired power plants dominate. 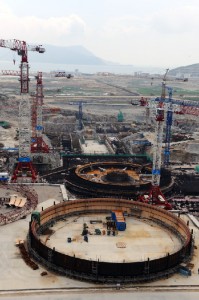 While nuclear energy was traditionally considered a pricey, technologically challenging alternative to fossil fuels in Asian countries, opinions are changing as policy makers consider factors such as “long-term access to natural resources, fuel-price volatility and environmental considerations.” And with most large-scale hydropower already built, nuclear energy is the only large-scale source of CO2-free electricity that can be expanded to meet rapidly rising demand in Asia.

As has been widely reported, the expansion plans on the continent are astounding. China has 24 reactors under construction today and plans to build some 200 GWe of additional nuclear capacity by 2030. India would like to increase its nuclear capacity by 13 times! And other nations such as Vietnam are moving forward with new nuclear sectors.

In the United States, however, we continue to sit on the sidelines. The U.S. government has issued one loan guarantee for a nuclear plant in Georgia, and that project is only now getting under way. Other U.S. projects wait in the wings for the American revival to take off the way it has in other parts of the world.

AREVA is not just talking about American nuclear energy revival; we are investing heavily in it. This includes investment of some $4 billion in projects such as the Eagle Rock Enrichment Facility in Idaho, AREVA Newport News manufacturing facility in Virginia, and development of U.S. EPR technology at multiple locations.

“The renaissance of nuclear energy is the most potentially lucrative development in the $6 trillion global energy sector,” Stephens concludes. But he adds that it is up to U.S. policymakers to help this country regain its leadership role.