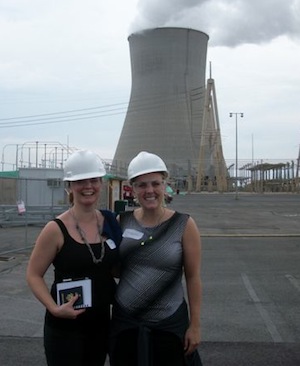 As an MBA candidate at the Thunderbird School of Global Management, it was my goal to land a summer internship in sustainability. So imagine my excitement when I found myself at AREVA, Inc. as the sustainable development and continuous improvement intern.

I recently had the opportunity to tour the Salem Hope Creek Nuclear Plant in New Jersey, hosted by PSEG, the Nuclear Energy Institute (NEI) (http://nei.org/), and the Women’s Council on Energy and the Environment. My summer employment has allowed me to become familiar with key issues that frame nuclear and renewable energy – safety, stakeholder engagement, energy demand, and [the artist formerly known as] climate change (i.e. greenhouse gas emissions), to name a few. During my visit to the plant I was able to experience these issues first-hand and gain a renewed interest in the energy challenges the United States and the world face today.

Our visit began and ended at the PSEG Energy and Environmental Resource Center, which is a key stakeholder engagement tool for PSEG (also a LEED gold-certified building). There are many interactive exhibits where kids, community members, and policy makers learn where energy comes from, what energy efficiency means and why it is so important. These exhibits caused me to reflect upon how truly complex the energy debate is, and how much public opinion is fueled by lack of knowledge and understanding about the tradeoffs of each form of energy.

After a tour of the plant (an engineering feat, to be sure!), led by some very dedicated and knowledgeable PSEG staff, we caught a glimpse of the area where used nuclear fuel is stored in dry casks. This is a solution many utilities have employed as a safe way to store the fuel until it is ultimately transferred to a federal centralized storage site. During a brief visit with the Chief Nuclear Officer, a colleague of mine asked whether PSEG had ever considered recycling the used fuel. The CNO answered, quite candidly, that he wasn’t sure whether that was necessary. Putting my MBA hat on, the ROI of investing in such a thing may not make it viable given the stable supply of uranium. But from a sustainability perspective, recycling with the aim of reducing waste should not be ignored. According to the World Nuclear Association, “the materials potentially available for recycling (but locked up in stored used fuel) could conceivably run the US reactor fleet of about 100 GWe for almost 30 years with no new uranium input.” There are many countries who have chosen to recycle their used fuel and have been doing so safely for decades.

Our group also stopped by a mock control room – nearly an exact replica of the genuine control room – where PSEG runs training for its nuclear operators. Here we talked about what happens when an alarm is sounded, how lessons learned are gathered, and then how these lessons learned are disseminated to the Nuclear Regulatory Commission (NRC) and throughout the industry. It struck me that in most industries, intellectual capital is seen as currency and used in gaining competitive advantage. Of course, plant design and the like are still viewed similarly in the nuclear industry, but information that ensures operational safety and efficiency is shared amongst utilities as a responsibility to the industry and the general public.

The trip could not have been complete without a visit to plant security. I knew that all nuclear power plants underwent an extensive review post-911 to secure against a terrorist attack, but I had no idea of the extent of the security force a plant employs. Salem Hope Creek has 3,000 armed security officers that are trained on site and tested annually by a roving “band” of NRC security officers that conduct a “Force-on-Force” (FOF) inspection. This program was in place prior to September 11, but has since been revamped. During a FOF exercise, a “Composite Adversary Force” (CAF) lays siege to a plant, and the plant’s force must protect it. Near the end of the tour, I asked our guide whether he hosted any anti-nuclear visitors. He responded that there were very few dissenters in the community. The plant brings hundreds of jobs to the community, and lots of community members are keen for PSEG to build another reactor. Many of those who speak out against nuclear do so via “press wars,” and do not take advantage of the numerous channels available for stakeholders to engage in dialogue. I wonder if those who either actively or passively oppose nuclear energy would take advantage of a plant tour, and whether the utilities’ obvious commitment to safety and championship of energy efficiency would make an impression. As an environmentally conscious energy consumer, and based on what I have learned over the past three months in the industry (and during my plant visit), it is my strong opinion that the United States and the world need to focus on reducing individual energy demand and maintain a diverse, low-carbon, energy mix.